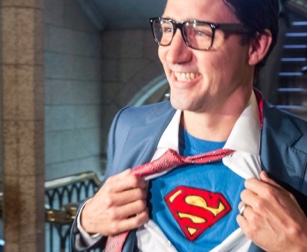 I love fun. I adore Halloween. I’m a teeny bit disappointed my Hubby and I didn’t dress up and attend the local Halloween bash this year. However, Rick’s been working long days, his sixty-hour week drags him down, so he was too taxed to Tango, literally. He’s been wondering if all his hard work is worth it, when half his wages go to paying taxes.

I know, here I go again. I keep telling myself I’m done, I will not write about Justin Trudeau anymore. I will not destroy my peaceful existence with another rant. But… Did you see the latest? And this comment is not because I am a stick in the Halloween goo, because I love it when people wear costumes at work on the spooktacular day.  However, when I saw Trudeau dressed up as Clark Kent, A.K.A Superman, I couldn’t help but do a tremendous eye-roll. I’m talking freaky pupils gone eye-roll, I actually lost vision in both eyes for a few seconds, and I admit to being grateful for it, because then I didn’t have to see Justin’s self-satisfied smirk any longer.

So now our egomaniacal Prime Minister thinks he’s slugging it out in the trenches and defeating evil at every turn like Superman. The audacity of him, you know, he could have reached for the joke. He could have disarmed his critics and haters with something fun. He could have dressed up like a beaver, or a polar bear, or a pair of socks? But no, he chose Superman. Once again he demonstrates his ego on a large scale. He see’s himself as the most powerful being on planet Earth. He chooses a Superhero created by Jerry Siegel and Joe Shuster, high school students living in Cleveland Ohio. Why didn’t he choose a Canadian Superhero like Wolverine, created in Cold Lake, Alberta, or Captain Canuck, created by Richard Comely, out of Winnipeg, Manitoba. Or is that all too domestic, and too Canadian for our worldly Prime Minister?

I am not a fan of a counterfeit smile.

I am a fan of an honest demeanour. I believe in humanitarian efforts, I believe in legalizing marijuana, and yes I would even champion a carbon tax if all that money were going directly towards supporting clean energy options. I believe Quebec, and any other province which dumps sewage into our waterways should be held accountable.  I believe Canada should manufacture more products at home. I believe we should be actively recruiting and developing inventive minds. I believe in creating positive trading relations with countries who have the same fundamental beliefs as our own country, freedom of expression, freedom to protest, freedom of religion unless it causes harm to others, (no devil worship please, sacrifices are generally not voluntary ) freedom of sexual orientation, and strong child protection laws.

What I am not a fan of however, is a hypocrite. On that note, I do not agree with all of Trudeau’s renovations, expensive holidays, and costly meals when he is away from the country, which seems to be a great deal of the time. I do not agree with the whopping deficit his government is incurring for the Canadian people. I especially do not agree with Trudeau’s deal with China. If the Trudeau government is so concerned about the welfare and rights of people, why is he striking trade agreements with countries like China? Do you want to  support an authoritarian regime by doing business with them? Have a look at these articles. This is Trudeau’s choice of trade partner—  the Amnesty report on China for 2016/2017, China’s deadly secret, and last, but not least Trudeau urges Canadian companies to do business with China.

This is why I’m not sailing along on the Trudeaumania love boat. Justin can’t possibly represent Superman, because Superman would never deal with a country which denies their people creative freedoms, and silences outspoken human rights activists through harassment, imprisonment, and torture.

Looking forward to seeing Trudeau’s next Halloween costume. God? Is that you? Not.